Social media represent powerful tools of mass communication and information diffusion. They played a pivotal role during recent social uprisings and political mobilizations across the world. Here we present a study of the Gezi Park movement in Turkey through the lens of Twitter.

We analyze over 2.3 million tweets produced during the 25 days of protest occurred between May and June 2013. We first characterize the spatio-temporal nature of the conversation about the Gezi Park demonstrations, showing that similarity in trends of discussion mirrors geographic cues. We then describe the characteristics of the users involved in this conversation and what roles they played. We study how roles and individual influence evolved during the period of the upheaval.

This analysis reveals that the conversation becomes more democratic as events unfold, with a redistribution of influence over time in the user population. We conclude by observing how the online and offline worlds are tightly intertwined, showing that exogenous events, such as political speeches or police actions, affect social media conversations and trigger changes in individual behavior. 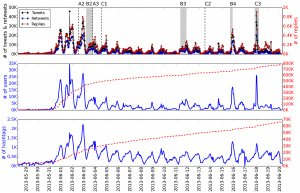 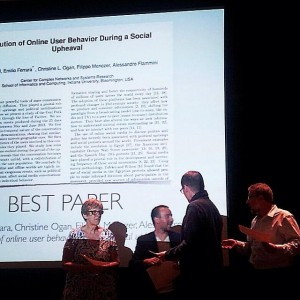 The Rise of Social Bots!